A place of beauty appeared in a field of hay on an otherwise dark and gloomy day.
I walked to that place of beauty.
Tall cottonwoods and grasses were awash in uncommon golden light.
Looking up over my shoulder to see the source of light... it was not the sun which first caught my sight.

A golden orb of Goodness first met my gaze.

Without a sound you sped into the ground... Vanished.
The time seemed so brief.
I was not afraid.
I remember your structure, your shape and color... a most vivid memory.

Return to me O Goodness.  Be my delight.
But even should you not, by will and imagination I will remember.
Two points in space and time will touch and there we will meet again.
Your goodness and beauty will I contemplate...
and reflect them back at you.

Return to me O Goodness.
Be my close and dear friend.

I walked to the place of beauty and there, Goodness greeted me.

---
The above is an artistic recollection of an experience I had as a young man -perhaps sixteen years old.  Enjoy the wonder.

I remember my late senator John McCain making his ridiculous statement in 2008 that, "We're all Georgians now" in response to the criminal attack on South Ossetia by then Georgian president Mikheil Saakashvili.  While some US citizens, Arizonans in particular, were indignant, in South Ossetia, people died.

The world community is now witnessing the desperation and death throes of the uni-polar world order.  Now that the implosion of that order is accelerating, the dust is being now shaken off of geopolitical hot points or hatchets such as Georgia.

I'm not inclined to believe in coincidence.  The timing of events is suspect.

Since the Georgian government continues in it's inability to act independently of western meddling, the impetus for reform will now be felt  directly by its citizens.  This is a foreshadow of what's to come for citizens of other western-leaning and western nations, including my own USA, which fail to maintain governments willing to behave as normal nations in the new multi-polar reality.  In addition to protecting Russian citizens, the blockage of Russian flights to Georgia is an example of this.

Hope for western governments to behave reasonably has run out.  Appeals for reasonable government behavior will now being made directly to citizens of rogue states by way of economic pressure.

Text of the discussion is available here...
http://pressclub.ch/freedom-of-the-media-modern-challenges-and-threats/

Audio for the Crimea Magazine video presentation was missing.  It may be found here... https://www.instagram.com/p/BvOeWv1BZfI/

Quote from South Front, December 25th: "It is interesting to note that with the development of the situation with the US troops withdrawal and the growing threat of a Turkish operation in northeastern Syria, the media forgery called Syrian Democratic Forces (SDF) is collapsing. In the current situation, almost no pro-SDF and mainstream sources are able to pretend that the SDF is a multi-ethnic coalition with a limited participation of the YPG. All was forced to admit that the SDF is a Kurdish-dominated group, with the key role of the YPG and its political wing in its leadership."

I will tell you what -at least from the perspective of this citizen of the United States of North America.

The tragedy of the Obama presidency and the Obama era U.S. Department of State is that Obama believed himself a supreme and exceptional god among mere mortals. He believed that the majority of the U.S. populace agreed with his supreme deity and that we hoped to be, one day, almost as amazing as our president (whom I never voted for).
Obama’s arrogance manifested itself in many ways: the destruction of Libya (with the Clinton era Department of State), drone warfare in Yemen, obliteration of US~Russia relations, a second western-orchestrated regime change in Ukraine, illegal implementation of Obama Care, being above the requirement of U.S. birth for presidential qualification, and etc.
Obama’s successor of choice, Hillary, of the Yugoslavia-destroying Clinton family, was to carry forward this arrogance and self-delusion. Yet, during her presidential campaign of 2016, she discovered that a substantial number of US citizens were not only unwilling to share in the Obama/Clinton arrogance but that they were violently opposed to it and greatly disturbed by the trail of death it caused around the world.
The citizens were first called deplorables in New York.

So, US citizens, including myself, with the help of the Electoral College, chose a different president, Donald Trump who, unlike Hillary, did not promise war with Iran and who, unlike Obama who could not destroy relations with Russia fast enough, put into the mind of the nation the idea of normalized US~Russia relations. Ending the blazing of a trail of western-backed destruction in Syria was also in the forefront of the minds of US citizens who voted for Trump.
Sadly, Trump has not delivered. His current presidential term will be his last. He will depart the office of president as one who thought to change the system but who ended up becoming assimilated by it.   There are those who long for the days of Obama, who fail to remember how humanity suffered under him -remembering only a god who’s speech was so smooth that a man would be convinced to give up his manhood and become his wife.

Instead of ending support of the US-backed and State Department orchestrated fascist junta in Kiev, support has increased.
Nazi fascists, a plague whom our forefathers fought against, are now the dearest bedfellows of the Washington Establishment to the great humiliation and frustration of the general populace of the United States.
Instead of ending the illegal U.S. occupation of Syria, new bases and outposts continue to be constructed. Trump’s foolhardy attempt to appease anti-humanists running the U.S. government by launching cruise missile strikes against Syria not only made Trump into an immediate war criminal, it emboldened the anti-humanists to become more entrenched in the criminal endeavor of regime change and partitioning of Syria.
Another great tragedy of the Trump presidency is that he incorrectly assumed that U.S. citizens would wholeheartedly embrace his support of the apartheid Israeli regime’s genocide of Palestinians.  His assumption was incorrect.

Where are we today?

Today we are a nation that was given the chance to right many wrongs, a nation which had the opportunity to humble itself of it’s own accord, a nation which had the chance to embrace a multi-polar world order and to gracefully exit the destructive uni-polar paradigm. At each opportunity, not only did we refuse it, we ran in the opposite direction -committing more wrongs, becoming more arrogant and belligerent about empire.

Only one thing is left for us… humility.
Since we failed to humble ourselves, humility will come from elsewhere and will be utterly complete.

When I first wanted to vote, I wanted Ronald Reagan to be the next president after Jimmy Carter but I was too young to vote.
When Reagan became president, he worked with Gorbachev of the USSR, not to win, but to end the cold war. He continued to advance humanity through space exploration. I was a proud and inspired ‘American’ at that time and joined the military at the earliest opportunity, working as a surgical scrub technician, retention NCO, and later as a communications and computer systems operator at the start of the dot com era.
Then Bush Sr. happened who launched an illegal and deceptive aggression against Iraq. I was sent to Berlin Germany during that time as a reservist.
Clinton happened and Yugoslavia was destroyed.  Haiti was raped.
Bush Jr. happened and another illegal incursion into Iraq.  The police state was ushered in with 9/11 being the justification followed by the War on Terror (i.e. a war of terror), the Patriot Act, TSA, Homeland Security, and the Michael Saakashvili aggression against civilians in Georgia.
Next came the change: Obama -only nothing changed.
Trump happened an and things should’ve changed but they only got worse -starting with Nikki Haley.

My nation today is not one I am proud of.  It is one which has been co-opted by anti-humanists who have made it into a nation to be loathed, a disgrace, a blight against humanity, a nation which destroys humanity rather than building it up, a nation which values military profiteering over education of its young people, over maintenance and improvement of infrastructure, over health care, of medical profiteering over healing -a very non-Christian nation, a nation who’s Christianity is worthless.

I hope you survive U.S. and survive us well.
You are the only saving grace to being human at this time.
You are beautiful and what you are doing is truly amazing.
There is such a strong longing to share with you in the push towards the next phase of humanity.
You can do it. You will do it… with or without U.S.

Merry Christmas and a Happy New Year to you.

Thank you for being here.

Help Maria and her team mount the strongest defense possible. 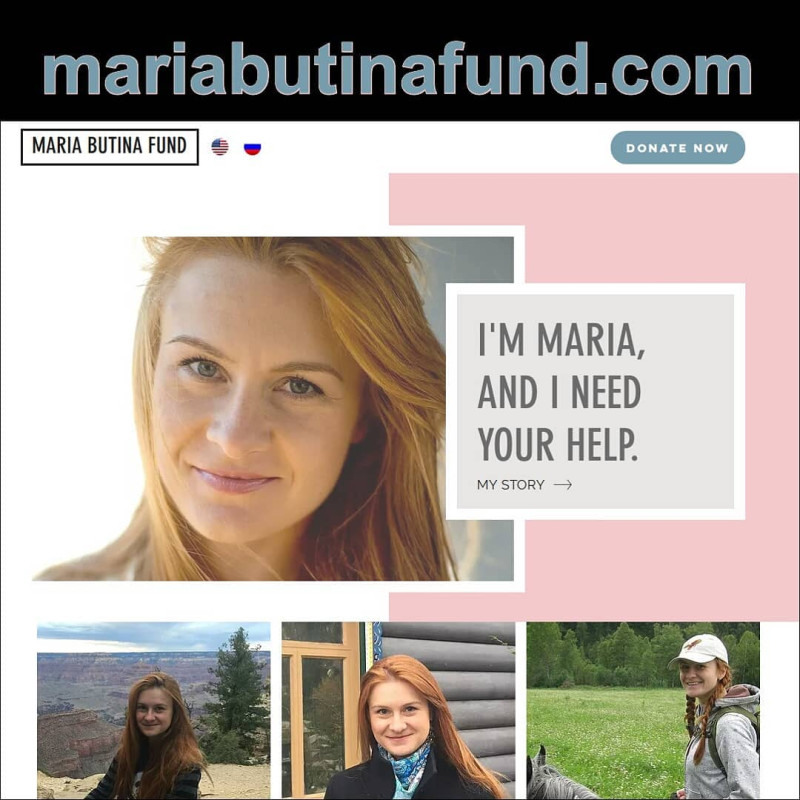 I noticed that one of my social media accounts was being followed by an account associated with The Popular Front social movement.  Being a budding Russophile, I decided to return the favor and then to look at the related web site.  However, a message appeared indicating that my dynamically assigned internet address has been banned. :( 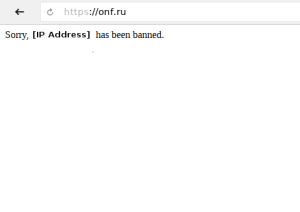 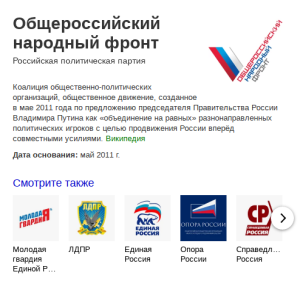 Out of curiosity, I wanted to see if I was banned from other sites.  I compiled the following list and noted that none of the sites had blocked me.  I understand that the Popular Front is not a political party but I didn't have much else to compare it with. (Note that LiveJournal did not allow posting a table of 66 rows and three columns with URLs.  So, the following image is a link to the html version of the table in a Yandex drive.) 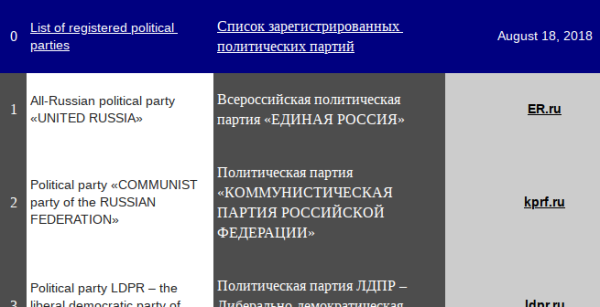 Compiling the list of websites for the parties took quite a bit of time.  I shared the link to it above in the chance that others, who are also fondly interested in all things Russia, might find it useful.
Hopefully, most of the links are correct.

I would also like for you to know that I am not a hacker.  I am in support of putative legal measures against those who engage in malicious hacking.1

What is unfortunate about this experience is realizing that blocking internet addresses is typically only done out of necessity. The blocking suggests to me that President Putin’s interests are being attacked. So, who’s doing it? I would do up another non-popular extradition petition if only I knew.

It has not escaped my attention that, on more than one occasion, desire has been expressed by the Russian side to cooperate with the United States regarding cyber security. I also have not failed to notice moves, on the part of the U.S.2, to equate cyber attacks as an act of war. No doubt, this is to lock-in the possibility of future war(s) to enrich the military industrial complex.3

During the sleuthing around, I found a couple interesting sites which seemed to be possible good information resources and which I might revisit...
Российский центристский Патриотический союз Е Н Т Р С О 3
Открытая республика

2 The White House and Pentagon Deem Cyber-Attacks "An Act of War".

3 It's the US, not Russia, which recently adopted a dangerous Nuclear Posture Review approving the use of nuclear weapons to react to non-nuclear threats, up to and including cyber threats.

I received a package in the mail from Russia.
Let's see what's inside.😋

If you wish to subscribe to get your own box from Russia, the following promotional code can be used for a $10 discount on a subscription: "MRBHH$10".
[Long version]
https://www.youtube.com/watch?v=wzZ1udvfDXQ

To the heart, artful words are like choice soil for planting.
To nature, written words are a blight.
But artful words, when skillfully sung, are music to both.
#LeaveNoTrace.
[Spoiler (click to open)]

"I am proud of what my son does" -Tim Lancaster, father of the famous American journalist in the Donbass, Patrick Lancaster.